The North Weald Event—the NELE Report NELE 60th Celebration day at North Weald Airfield On Sunday 20 August 2017 the North East London and Essex group of IAM RoadSmart celebrated its 60th anniversary with a unique driving experience day for full members, associates and their friends and family.  NELE is just one year younger than the IAM itself. 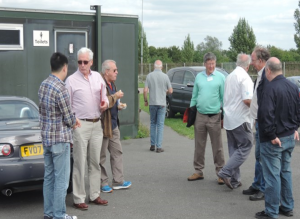 This special event was held on part of North Weald Airfield.  The day consisted of each participant taking the controls of an articulated lorry, a 10 ton rigid lorry and a single deck bus.  Each of us had 10 minutes driving each vehicle under the expert guidance of fully trained and experienced instructors.  A point to note is that all of these vehicles had automatic gearboxes.  I was surprised at this but was told that these days if an operator wanted a manual gearbox it had to be specified at build time.

There were about 40 taking part and we were allocated into groups of five and each group moved from one vehicle to the next after we had all driven that vehicle.

In addition a number of NELE observers were offering assessment drives to full and associate members as well as some family members.  Guidance and instruction were given during the drive with a written and oral debrief following the drive.  I found this particularly useful as I passed my advanced test six years ago and am about to apply for a voluntary re-test.

While the first ‘victim’ was attempting the course the other four were taking careful note of what not to do so that after their attempt they could boast how good they were.  Unfortunately that was not always as easy as it seemed.

This was the bus we had to drive The first vehicle my group drove was the bus.  We each had to drive round a course marked with cones and to stop at a simulated bus stop such that the bus was brought close to the kerb and stopped with the door opposite a flag.

Another task was to reverse the bus down an ‘alley’ of cones just using the mirrors for guidance.  This highlighted the blind spots of such a large vehicle.  When a car etc is about level with the front wheels of the bus, the car becomes ‘invisible’ to the bus driver as his mirrors do not cover this area.

Finished with the bus the group moved to the rigid lorry and another group took over the bus.

This is a 10 ton rigid lorry with 5 tons of ballast inside.  The tasks for the rigid were similar to the bus except as only one could be in the cab at one time the others watched from the roadway.  Each of us were told how to safely climb into the cab and how to operate the controls.  We had to drive a figure 8 course through cones.  This also highlighted the blind spots when some of the cones could not be seen on tight turns.  The reversing manoeuvre was slightly different, and more difficult to judge.  The task was to turn a circle and stop in a position to be able to reverse into a ‘loading bay’ marked by cones.  .  At the end of the bay a man (cone) was standing.  We had to reverse using the mirrors until we were at the very end of the bay, that is with the tail of the lorry opposite the last cones.  BUT without going far enough to ‘kill’ the man standing at the back of the bay!

It was surprising how difficult it was to judge the length of the lorry using the curved mirrors which gave a foreshortening effect.  I think the ‘man’ was killed several times during the day!  Finally we had to drive forward at about 15-20 MPH then make an emergency stop such that the lorry stopped about three feet past a set of cones.  By the way, the lorry had a load onboard of five tons so this was a lifelike scenario.

Our groups final vehicle was the articulated lorry, this looked enormous and very long.

The articulated lorry with the instructor eagerly awaiting our group.  Again when one of us was driving the others watched from the roadway.  After the explanation of how the automatic gearbox was operated we were told the course we had to drive.  Driving circles around more cones we realised how manoeuvrable these beasts are.  .  We also realised the massive blind spots the driver has to contend with when the cab is not facing straight forward.  After turning a circle we were asked to reverse the trailer into a ‘loading bay’ as before.  .  We were advised that the way to do this was to reverse SLOWLY and lots of wheel movement were required.  That sounded easy!  But when the cab was moving one way the trailer seemed to move the other way.  Also when the cab turned the mirrors turned and one lost sight of the cones.  It was only when the cab was straight that one could see the cones again.  Eventually most of us managed to get into the ‘bay’ without knocking over too many cones although it seemed quite a wiggly route.  The foreshortening effect of the mirrors was more obvious with such a long trailer.  The instructor did show us how it should be done and he made it look so easy.

It was a most enjoyable day and gave us an opportunity to drive vehicles that would not normally be available to us.  Even the weather was good and the forecast rain did not appear.

Our very grateful thanks must be given to Paul Gillett, Group Chairman and his committee for organising such a marvellous day.  Paul was at the helm all day to ensure the very tight timetable was managed and we all had the chance to drive all the vehicles.  Thanks also to the observers who took us for an observed drive.  Giving constructive advise to either maintain our advanced driving skill or to suggest improvements where required.

Thanks to the ladies who supplied us with tea, coffee and biscuits all day and especially to Robinsons Training Services of Purfleet, Essex who despite a recent family bereavement supplied the three vehicles and their respective instructors free of charge!!  The instructors advised group after group with hardly any break in between.  It was a very long day for them.  Without the generosity of everyone involved this day could not have taken place.